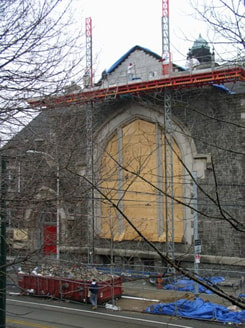 CALVARY RESTORATION AND REDEVELOPMENT:SYNOPSIS AND BUDGET

The Calvary Center for Culture and Community has become a destination and focal point of vital importance to the surrounding community that it serves and beyond.  Its success thus far in efforts to restore and redevelop the Calvary UMC church building at the strategic corner of 48th Street and Baltimore Avenue for purposes of culture and community in West Philadelphia has already attracted a wide range of funding, and it has become a model for redevelopment of inner city church buildings which are underused, understaffed, and otherwise in crisis.

The Calvary Center for Culture and Community leases and operates the historic and architecturally significant Calvary building.  The Center, a secular 501 (c) (3) organization, was formed in 2000 in response to community outcry to save this magnificent but decrepit and fast deteriorating building, which houses a world class organ, outstanding woodwork, stained glass domes, and the largest signed Tiffany window ensembles in the Delaware Valley. The Center’s mission has always been to restore and redevelop the building for multiple uses to serve and build the surrounding community.   After conducting focus groups representative of the remarkably diverse community, the goal was set to make the space available for community and cultural purposes, while at the same time maintaining the building as a sacred place, now open to multiple congregations.

To date, the Center has raised over a million dollars, has resolved the structural problems in the building and has made all the spaces usable again.  The building’s repairs and restorations, still underway, will require some $2,500,000 to complete this monumental task.  But the most remarkable aspect of the Center’s success has been in the redevelopment of the building to serve the surrounding community in new and exciting ways. Today, the Calvary Center serves as the unofficial town hall of the surrounding neighborhood, site of community and town meetings, gatherings and events.  The neighborhood community organization and the University City Historical Society established permanent offices at the center, as well as several social justice groups, Prometheus Radio Project (a unique group that founds community radio stations all over the globe), three twelve step groups, youth martial arts, literacy center, summer youth camp offices, and a food referral service.

The Center has thus become a true center of community.  This year, the Children’s Community School, a preschool for two and three year olds, is being founded at the Center, will open this fall and is already at initial capacity with a waiting list. The Center has also become a significant venue for culture and the arts.  Curio Theatre Company has completed its successful fifth season at Calvary Center, and Crossroads Music, featuring world music, has completed its eighth season here.

Finally, five congregations now worship at Calvary Center, including the original Methodist congregation, Mennonite, Pentecostal, and Eritrean Orthodox congregations, and a Jewish synagogue, founded here as the first synagogue in the neighborhood since the last one closed over half a century ago. All this has been created from an empty and nearly ruined building in ten years.  But as if this weren’t enough, the dramatic increase in use of the building has created a halo effect in revitalization of the surrounding community.  Within three blocks of Calvary Center, no fewer than six new restaurants have opened, as well as a second cultural and wellness center, a bookstore, and several new retail outlets, greatly increasing foot traffic and a destination area around 48th and Baltimore for evening entertainment that did not exist before.  Equally important, members of the congregations have been purchasing homes in the vicinity.

Other groups use Calvary space for special events and large meetings.  Calvary Center has been proactive in giving direction and support to redevelopment in the surrounding area.   Members of several of the organizations now using Calvary have invested in several of these new businesses, including the bookstore and two of the restaurants.  Calvary Center itself supported zoning for the Dock Street Brewing Company restaurant, and provided support and input for the nearby state store’s renovations and for the redevelopment of Cedar Park.  The Center also hosted community meetings which produced designs for important murals along Baltimore Avenue. While many churches allow other groups to use space, this overall redevelopment with a more secular community-building focus has been unique in its scope, as has been its emphasis on shared use.

Calvary Center has become a model for redevelopment of inner city church buildings and has been featured in national publications and even in Heritage Canada!  The Calvary Center Project is already used as a showcase for innovative new uses of church buildings by Partners for Sacred Places, a national advocacy and training organization focused on the crisis of deterioration and loss of our national (especially urban) church heritage.  Calvary Center’s unique approach to shared space (including shared internet, copy machines, etc.) creates a natural greening effect because of shared use of utilities and resources, and a subcommittee of the Center is planning for installation of solar panels on the unobstructed massive flat roof.

Calvary Center is worthy to serve as a model for the State of Pennsylvania as an innovative approach to organic and imminently sensible urban renewal and redevelopment of deteriorating inner city church buildings. While building use now pays for day to day operations and normal maintenance of the building, even while cost for space use at Calvary Center is well below market rates, the very expensive restoration of the delicate architecture still leaves much work to be done. Below is a budget for completion of the restoration and renovations of the building to make it the showplace worthy of the grandeur of the architecture itself and of the ideals which it supports.