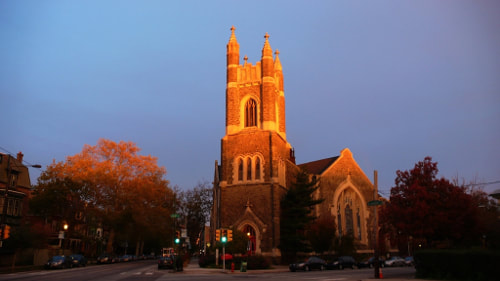 Calvary at sunset.
MEETING TIME:Services: Sunday 11:00am Chapel
CONTACT:Rev. John Pritchard
Ed Fell
215-724-1702
www.allmeansall.org
The Calvary United Methodist congregation has a religious tradition which has often been at the cutting edge of its denomination.
Of the tens of thousands of Methodist churches, Calvary was sixth to become a reconciling congregation (open to LGBT community), a milestone only achieved by 400 Methodist churches nationally to this day.
It was an early incubator for what was to become called feminist theology with two in-house pastors contributing seminal works on the subject.
The congregation is notable for its racial, ethnic and economic diversity and stands as a model for the surrounding community, which itself is exceptional in this respect.
The Methodist congregation supports twelve step programs including Alcoholics and Narcotics Anonymous. It also supports interfaith services, a food referral service, prayer groups, Sunday school, bible studies and book studies. The congregation supports the LGBT community in several ways, hosting community activities and sponsoring events and legislation on their behalf. It also sponsors a weekly food referral service

Calvary United Methodist Church is a congregation of about 50 members located in West Philadelphia. Founded in 1895, the congregation of Calvary proudly upholds a century-long affiliation with Methodist outlook and tradition, following the example of the living Christ.

Our worship and vision is firmly based on the paramount teachings of the Scripture. As a church, we strive:

To love all our neighbors as we love ourselves, to not pass judgment, to show compassion as we have been shown compassion, to forgive as we have been forgiven, to do unto others as we would have others do unto us, to pray without ceasing, and to love God with all our hearts to the best of our understanding.
​
Within this context, our specific goals are to:

Uphold the mission of the church by: